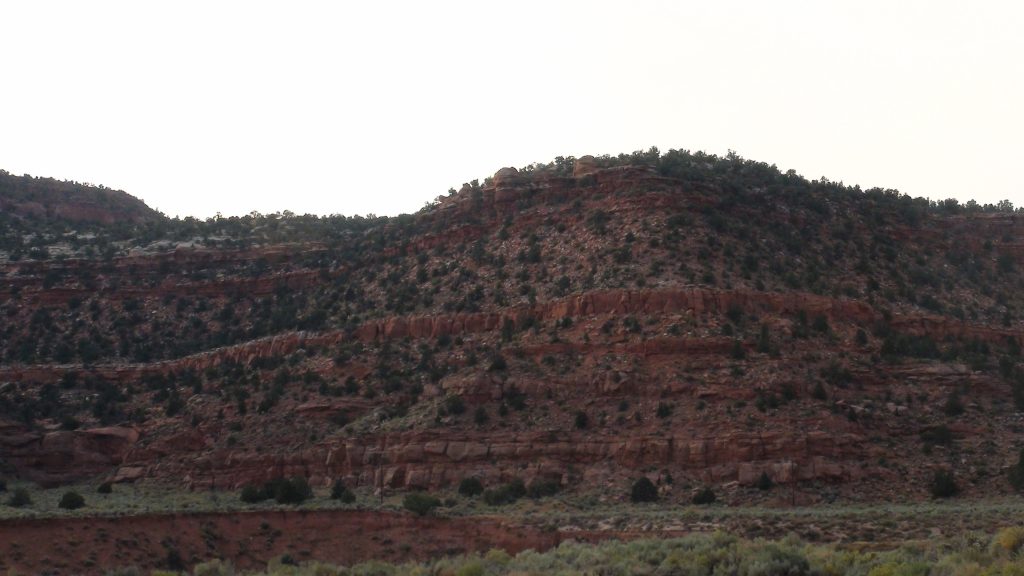 Lines of sediment from Noah’s Flood clearly evident in the Utah hills.

Then all who heard were amazed, and said, “Is this not he who destroyed those who called on this name in Jerusalem, and has come here for that purpose, so that he might bring them bound to the chief priests?” Acts 9:21

Following the translation of the KJV, the tense of the verbs in the NKJV doesn’t give the sense of the Greek at all. A better translation that more closely follows the original will be used –

“And all those hearing were amazed and were saying, ‘Is this not the one having ravaged those in Jerusalem calling on this name? And he had come here for this, that he might bring them, having been bound, to the chief priests.’” (Berean Literal Bible)

The last verse noted Saul immediately preaching the Christ in the synagogues, noting that He is the Son of God. With that, the narrative continues with, “And all those hearing were amazed.”

Who “all those” are is not stated. It is certain from the words that the preponderance of them are nonbelieving Jews. However, it also seems to appear from the words of this verse that those nonbelievers didn’t have any real animosity with those who professed Christ. They may have even continued on harmoniously together while simply disagreeing on the part about Jesus.

As for Saul, his conversion had taken place. From there, it is speculated (see commentary on the previous two verses) that he went to Arabia, received his revelation from the Lord, and returned to Damascus where he then immediately began his preaching. It can be certain, based on his time as a Pharisee, that his knowledge while preaching was precise and irrefutable.

His words would leave no doubt as to the message he was conveying. Not only did he preach that the Christ (Jesus) is the Son of God, but he would be able to fully support his words with Scripture. Because of this, those who were hearing him “were saying, ‘Is this not the one having ravaged those in Jerusalem calling on this name?’”

The knowledge of Saul’s past actions had become well known among the Jews of Damascus. He was intolerant of those who professed faith in Christ, and he treated them violently. The Greek word, portheó, translated as “having ravaged,” is found only here and then twice in Galatians 1. It is a word indicating to destroy, lay waste, or make havoc of. Saul (Paul) will later use this same word to describe his own actions –

“For you have heard of my former conduct in Judaism, how I persecuted the church of God beyond measure and tried to destroy it.” Galatians 1:13 (see also Galatians 1:23)

The very name (Jesus, the Christ) that they had proclaimed, and which Saul desired to lay waste, is the same name that he now openly proclaimed. It was beyond their comprehension that this was occurring. And not only had he tried to eliminate this name in Jerusalem, but they continued, saying, “And he had come here for this.”

Saul was willing to travel beyond the borders of Israel to destroy any and all who avowed the name of Jesus. And he had come to Damascus for this very purpose. And now, here he is in Damascus proclaiming the very name that he had worked to destroy. And this wasn’t just a personal rage against Christ. It had the approval of the leadership, and he was a Pharisee. Hence, he had come under authority “that he might bring them, having been bound, to the chief priests.”

With the full weight and authority of the priesthood (it is plural to most likely indicate those who served as high priest in the past and who still wielded authority as well as the current high priest) Paul was commissioned to bring an end to the faith. The incredible nature of his open profession of this name now mystified any and all who heard. There may even have been a degree of skepticism in their minds as to whether this was a ploy to flush out those who believed.

Life application: One of the unique things about the truly converted in Christ is that there is often a sudden and dramatic break from their ways of the past. For nonbelievers who see this change, there may be the idea that their friend has gone bonkers (which is actually not untrue, because the new believer has gone bonkers for Christ – see 2 Corinthians 5:13).

As for other believers, when they come to Christ, there may be joy, skepticism, wariness, and so on from non-believing friends or family. It all depends on who the person was. For example, if he was a scam artist, it could be skepticism that he is using his “newfound faith” as a means of enriching himself. However, after a while, the true fruit of his conversion will be seen for what it is.

There is such an amazing degree of freedom in Christ that it is often inexpressible. To know that the weight of the debt of one’s sin is erased can be beyond words. And so, actions step in and fill the void. This is a marvelous period in the new believer’s life, but it must also be tempered with the understanding that sound theology and right doctrine does not come through a sudden conversion. Instead, it must be developed over time.

And so, it is both important to not quench this new and excited faith, but it is also important to not let this young believer start spouting off doctrine that is unsound. It is also why Paul instructs us concerning those who are young in the faith, saying that an overseer should not be a “novice, lest being puffed up with pride he fall into the same condemnation as the devil. 7 Moreover he must have a good testimony among those who are outside, lest he fall into reproach and the snare of the devil” (1 Timothy 3:6, 7).

When you see a new believer who has gone bonkers for Christ, rejoice in his conversion and yet be willing to temper his new faith with the understanding that there is a lot to be learned in order to be an effective communicator of proper doctrine. In other words, fan the fire while also not adding too much fuel to it at one time.

Lord God, help us to be sound mentors of those who come into the faith so that they are properly discipled in order to effectively communicate their newfound faith to others. May we not quench their zeal, while at the same time, may we help them to keep from running ahead and falling into ruin. Yes, help us in this, O Lord. Amen.