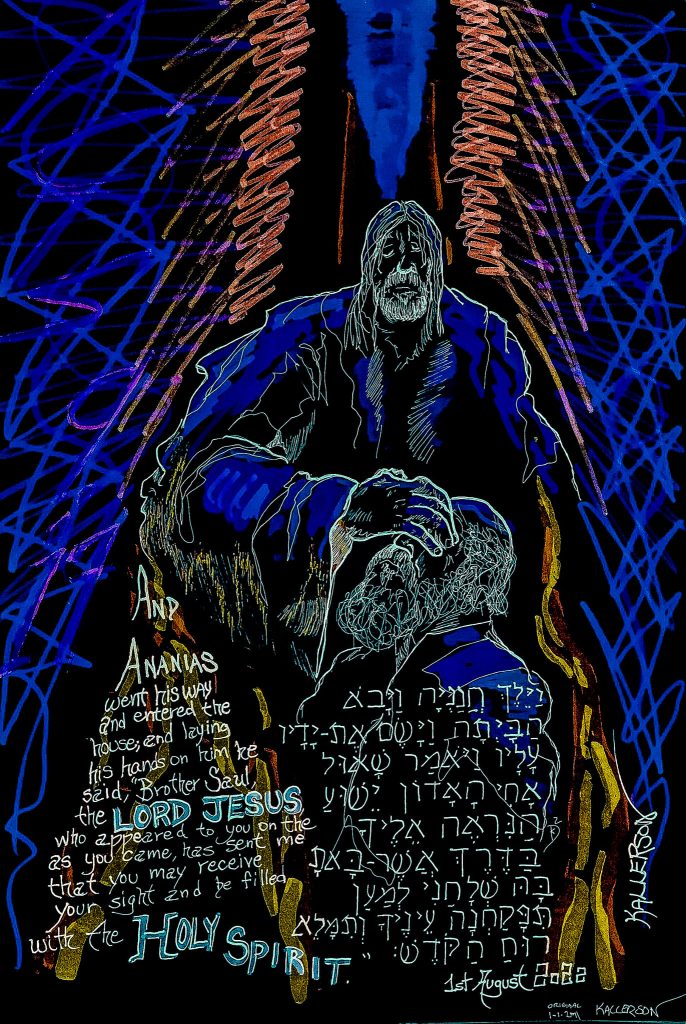 Immediately there fell from his eyes something like scales, and he received his sight at once; and he arose and was baptized. Acts 9:18

The previous verse referred to Ananias’ entrance into the house, his laying of hands upon Saul, and him noting to Paul that he had been sent so that Saul might receive his sight and be filled with the Holy Spirit. Now, this verse says, “Immediately there fell from his eyes something like scales.”

It is a word found only here in the Bible, lepis, or scale. It can be a peel, like a rind or husk, a fish scale, and so on. Hippocrates used this word as a technical term for a disease of the eye. The verb form is used in the apocryphal book Tobit to describe a similar disease –

“And the whiteness pilled away from the corners of his eyes: and when he saw his son, he fell upon his neck.” Tobit 11:13

Either way, the miraculous isn’t diminished if there were actually scales on his eyes or not. The miracle is that both Ananias and Paul had been given a vision in the past, they had now come together as seen in the vision, Ananias had placed his hands upon Paul in order for Paul to see again and to receive the Holy Spirit, and immediately Paul was able to see. This is what Luke specifically records, saying, “and he received his sight at once.”

As Saul could not see for three days and then he immediately was able to see, just as the visions had revealed, the miracle stands. With this accomplished, Saul is now ready to be obedient to the command of the Lord for all New Covenant believers. Whether Jew or Gentile, it is an expectation that was obviously conveyed to him because Luke next records, “and he arose and was baptized.”

If this was not expected of believers, this would not have been done. Saul already received the Holy Spirit, he was already saved, and his vision was restored. But the Lord commanded this as an outward sign for those who have entered the New Covenant, and so Saul – the one who had only days earlier openly persecuted the church – now made his open profession of being included in the faith he once tried to destroy (see Galatians 1:23).

As a side note, what is possible is that Paul’s baptism occurred in one of the two rivers noted in 2 Kings 5:12, the Abanah or the Pharpar. Both are still there to this day, although the names have been changed to Arabic. They are not far from where Paul received his sight, and it can be speculated that this is where they would have gone to.

Life application: We live in a physical world where the expectation is that things will work in a certain way. Because of this, we will look for naturalistic explanations for why things happen. There is nothing wrong with this. If Luke (a doctor who elsewhere meticulously records events as they occur) makes a statement that it was as scales falling from Saul’s eyes, there is nothing wrong with people trying to explain that in a natural way.

By arguing against the miraculous in this verse, a person is affirming that the event in the verse occurred. Otherwise, why even bother attacking what the verse says? Be confident concerning what is recorded in Scripture. People have argued against it for thousands of years, and yet it is they and their arguments that are lost to time. The Bible still stands as the sure and firm witness to the workings of God that it has since the time it was received. We have a sure word. We have the Bible!

Lord God, how firm and sure is our foundation! The words contained in Your word are truth. They are light. They are a source of hope and encouragement. Thank You for Your attentive care in the history of the world as You have slowly and methodically recorded events that have revealed Your working in Christ for the sake of humanity. Yes, thank You for Jesus Christ our Lord and for Your word that tells us of Him. Amen.