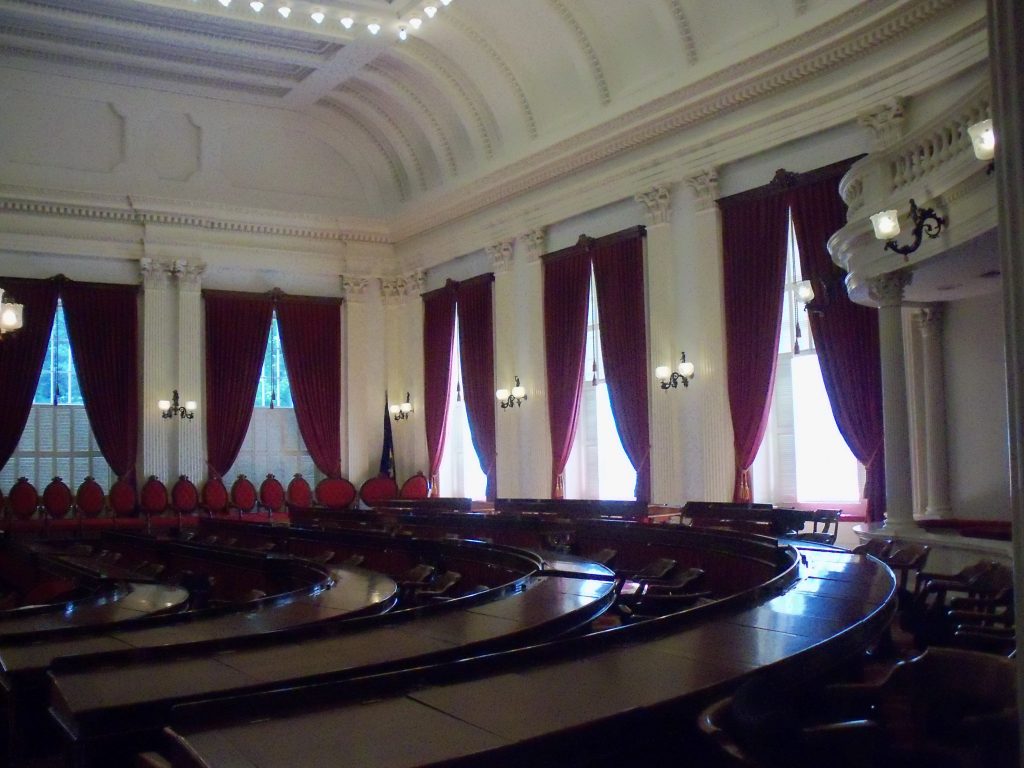 Inside the house or senate at Vermont Capitol.

On the next Sabbath almost the whole city came together to hear the word of God. Acts 13:44

In the previous verse, it was noted that after the synagogue meeting, many of the Jews and devout proselytes followed Paul and Barnabas who spoke with them. Now, the passage continues with, “On the next Sabbath.”

The verb is a present participle and more rightly reads, “On the coming Sabbath.” This appears to then give the sense that Paul and Barnabas spent the entire week talking to the people who had followed him on the previous Sabbath. Others as well certainly joined them to hear what they had to say. By the end of the week, the news had spread enough that “almost the whole city came together.”

This does not mean that they came together in the synagogue. In fact, it may be that they met in an open area around the synagogue, in the street, or somewhere else. The point is that the people came out because of what Paul and Barnabas had to say.

This is in contrast to the regular meetings of the synagogue which had Jews and some proselytes each week. But the difference is that the message of Paul and Barnabas was not of the bondage of the law, but the freedom from the law found in Jesus Christ. And yet, it is a message directly from Scripture itself. Therefore, these people came “to hear the word of God.”

First, the Old Testament points to Jesus. Paul could easily speak of how the words of Scripture show this. But in speaking about Jesus as the fulfillment of those Scriptures, the apostles were led by the Spirit, just as Jesus promised. Therefore, as the Spirit gave them utterance, so they spoke out the word of God.

What they taught was not just words of the past that led to bondage, punishment, and even exile – as testified to by the synagogue of the Jews being in a foreign land, but of freedom, exaltation, and a home in Christ anywhere and at any time, because those who worship Him do so in spirit and in truth. No wonder the whole city came out to hear this message. It was a complete contrast to what the Jews taught, even if the same Scriptures were used.

Life application: The message of Jesus is not one that requires those who proclaim it to put on dress shirts and a tie and walk around in a stuffy manner. It is not one that says, “If your appearance doesn’t conform to a set standard, you are not qualified to teach it.”

One does not need to sit in a synagogue, a formal classroom, or in a church setting to seek out the message it conveys. It is a message that can be acted out on a stage, presented in a movie, read directly from the word on the beach, or pondered over in the confines of one’s own house.

Those who teach it can do so in homes, garages, or gymnasiums. There are no set times or days that those who come together are obligated to. There are no dietary restrictions for snack time when gathered. Those who follow Christ are not bound to the legalistic standards of others. If the precept is not taught in Scripture, it is not required.

Don’t add to the word through legalism. Don’t detract from it in all it proclaims. Instead, cherish the word, hold fast to it, and ponder it as the greatest treasure. The time you spend in it will never be wasted. So, spend a lot of time in it!

Glorious Heavenly Father, how precious is Your word. How wonderful it is to read it and to meditate upon it. It brightens up our day, illuminates our evenings, fills our hearts with joy, and leads us to a greater understanding of who You are and the care You have for Your people. Thank You for this precious word! Amen.